This past Saturday we had the honor of serving as Best Man and Matron of Honor at the first wedding at Living Stones Community Church. The lovely couple to be wed was Nighty and John Bosco, both whom are workers at Abaana’s Hope.

We had no clue what to expect from an Acholi Christian wedding, but to sum it up, it was full of energy, fun and a long, but joyful celebration!

We started the day bright and early with a phone call at 5:30 a.m. from a worker trying to find a ride to the land for his family members. Weddings in Uganda are a huge event. Everyone is invited and a lot of people come with family members who know the bride or groom.

Nighty and Bosco had informed us that Chase, the best man, was not allowed to drive the day of the wedding. So Kris, a fellow missionary, picked us up and we headed to town to pick up the wedding cakes. We drove to the land and I was dropped at Nighty’s mothers land. All of the ladies in the wedding party, along with the wedding planner, Nighty’s sister-n-law and hair dresser we tucked away getting ready in one otlum. The only lighting they had in the otlum was from a tap light that lit up one corner of the home. The atmosphere in the otlum was extremely similar to western weddings. Ladies were helping each other with sashes, hair bows, and even body glitter. The flower girls sat patiently on a mat and were dressed perfectly in their white dresses, white socks, white shoes and white curly ribbons around each ankle.

Meanwhile, the men went to Abaana’s Hope to have their vehicles decorated with tulle bows and balloons. Once the vehicles were decoration all three vehicles went to the groom’s families land to pick the groom, his wedding party and family. They were greeted with loud cheers as they pulled back up to the church. Then the groom, best man, smart boys and peg boys formed a formation and did their 15 minute wedding march all the way down the red carpeted aisle of the church.

Then, all three vehicles left Abaana’s Hope to pick the bride, the women in the wedding party, and her family. We loaded the vehicles the way Nighty instructed and headed to the chapel. Myron, a fellow missionary, drove the wedding party and we learned it is customary to blow the horn in a “beeping” pattern all the way until we reach the chapel.

We were met at the entrance of Abaana’s Hope with ladies waving us in with tree branches and met by a ton of well-wishers cheering, singing and dancing in the chapel. We all formed our formation and began the same 15 minute wedding march as the men all the way down the red carpet aisle.

After we reached the front of the church the bride and groom exchanged vows, we sat as the pastor preached a sermon, then we got up to cut the cake. Representatives from both families, Chase and I, the bride and groom all put a hand on the knife as the cake was cut. Then Nighty and Bosco fed each other a piece of cake and then proceeded to bring each family member a piece of cake. The remaining cakes were given to specific groups of people who have helped with the wedding.

After the ceremony festivities were complete the wedding party lined up and we did the 15 minute march all the way out of the church. We took pictures and then Nighty went to change into her “changing dress.” Once she changed the wedding party arrived back at the chapel, did a quicker march in because time was quickly passing so was had to speed things up. They served a huge meal of goat, beef, chicken, beans, rice, potatoes, cabbage and sodas to drink. 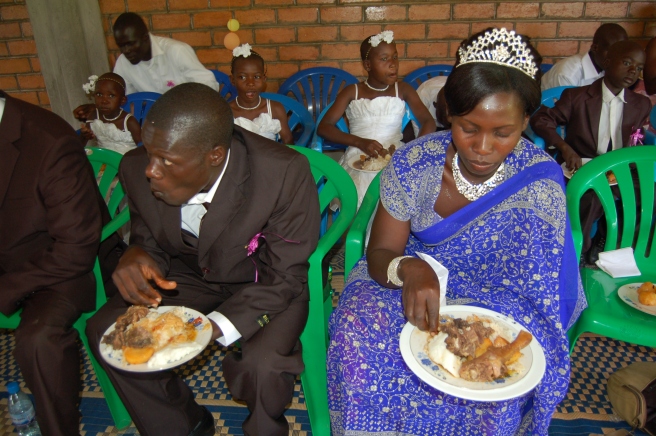 My favorite part of the wedding was the very last thing on the schedule, the procession of gifts. Nighty, Bosco, Chase and I stood behind a table at the front of the chapel. The master of ceremony proceeded to call for different groups of people to present their gifts, for example the grooms family, brides family, AH workers, ect.. They started at the back of the church and cheerfully danced and sang all the way down the aisles and greeted the bride and groom with their gifts. The bride and groom them passed them down the row of bridesmaids into the back of Myron’s vehicle or for live gifts, into the back of the dump truck. My favorite gifts were the goats with their heads wrapped with wrapping paper and a “to and from” note taped to their sides.

What a joyful experience and day it was to watch as two people went completely against normal culture and wanted to follow the biblical example of marriage.

One thought on “Wedding Bells”